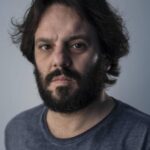 A portrait of the Land of Fires, the strength of its inhabitants, their attachment to their origins and their battles to heal their land.
by Stefano Schirato

With the contributions of:
• Father Maurizio Patriciello (the priest symbol of the fight against pollution in Campania)
• Prof. Antonio Giordano (oncologist, Director of Sbarro Institute for Cancer Research and Molecular Medicine, Temple University di Philadelphia )
• Arianna Rinaldo (Photoeditor & Artistic Director of Cortona On The Move + PhEst)

I’ve been working for years on a large project focused on the connection between pollution and diseases due to unhealthy environmental conditions. In 2011 I documented the effects of the Ilva industrial plant in Taranto on the people who live near the factory. In the same year, on the occasion of the twenty-fifth anniversary of the explosion of the nuclear reactor at the Chernobyl power plant, I focused on the illegal traffic of radioactive material.

In 2015 I started working at my project Terra Mala, documenting the complex situation of the area called Land of Fires, located in Campania, between the provinces of Caserta and Naples, the most polluted of the region because of millions tons of toxic waste illegally disposed on this territory for over thirty years. Thanks to the help of Father Maurizio Patriciello – priest of the parish of San Paolo al Parco Verde in Caivano and one of the main activists of the area – I collected testimony of those citizens who fight so that the poisoning of the Land of Fires will not be forgotten.

I have documented the daily life of dozens of families aware of the risks they run for their health. I portrayed the degradation of the territory, the nomad camps authorized to be built on rubbish heaps; men, women and children forced to live everyday on a toxic land. I could record the terrifying size of illegal landfills, piles of underground poisons, just a few meters far from the houses.

Back in 1991 Mario Tamburino, an Italian-Argentine truck driver, was admitted to the hospital in Pozzuoli due to a sudden eye irritation, so intense that he couldn’t see properly. He soon become completely blind. His serious eye damage was caused by the drops of a corrosive substance leaking out from the 571 barrels he was transporting from a company specialized in disposal of toxic waste in Cuneo (Piemonte, north of Italy) to Sant’Anastasia countryside in Naples where the hazardous cargo of the track had to be unloaded.

An investigation followed, the word ECOMAFIA was created and the multibillion illegal business between the Mafia and some entrepreneurs from Northen Italy came to light.

Two years earlier, in 1989 at “La Lanterna” restaurant in Villaricca, some Camorra and Mafia exponents signed an evil treaty with local politicians, corrupted members of secret services and of the Masonic Lodge P2 to bury millions tons of toxic waste in Campania. Everyone received their share of benefits. A real large-scale garbage industry, organized the expenses of the local populations.

The devastating effects of this criminal agreement have permanently affected the fate of the so-called Land of Fires: an area that includes 55 municipalities between the provinces of Naples and Caserta, the most polluted area of the entire region, because of the millions of tons of dangerous substances illegally disposed of during the last thirty years.

The details of the procedures used to dispose the toxic waste were revealed during the testimonies of collaborators of justice such as Carmine Schiavone and Gaetano Vassallo, treasurer and “minister of waste” of the Casalesi clan, a mafia cell, that were among the main responsible of those trafficking.

The first disposal techniques consisted in digging huge over 7 meters deep holes with bulldozers where manufacture leftovers of companies from all around Italy were buried.

After the investigation, the disposal technique with huge trucks and excavators changed and turned into what it has been known as “small disposal”. Migrants without documents or gypsies are paid to dump barrels in the fields and burn them together with old pneumatic and gasoline. These fires produce high smoke columns and make the air unbreathable.

Terra Mala describe the biggest environmental disaster in Italy, which has had and still has tragic effects on the soil, agricultural products, livestock and groundwater.

The latest report of the Istituto Superiore della Sanità (dated January 2016) provides an estimate of the effect that this criminal outrageous behaviors has had on the population: in the area of ​​the Land of Fires, compared to the national average, the rate of tumors is 11% higher among men and 9 % higher among women. Scientists also identified a series of diseases that could potentially affect the population of the area at an atypically higher rate compared to the standards, moreover they collected alarming data on children mortality caused by cancer, extremely high in the entire area of ​​the provinces of Caserta and Naples.

Terra Mala is actually made of two strands, continuously intertwining and diverging. On one hand, the story of a land, tormented by a malicious and underground pollution, that often turns into a death sentence. On the other hand, the story of its inhabitants: young children; inconsolable but courageous mothers, who unceasingly march and protest against this massacre; ill people, fighting daily to keep alive; teenagers who lost their parents and claim a better future. All these people are united by the same destiny and by such a strong attachment to their origins that if you dare to ask them why they don’t move somewhere else, you might get an answer like “And where shall we go?”